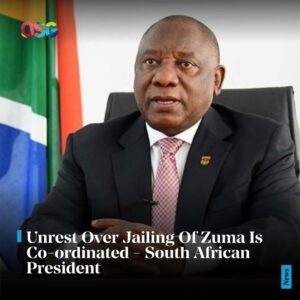 South Africa President, Cyril Ramaphosa has said the violence that has rocked the country was pre-planned, describing it as an assault on democracy; this according to BBC News.

During his visit to KwaZulu-Natal, Ramaphosa said “It is quite clear that all these incidents of unrest and looting were instigated – there were people who planned it and co-ordinated it”.

He further said the riots were an attempt to hijack South Africa’s democracy. He told supporters that instigators had been identified, but didn’t elaborate.

The president added that “We are going after them”.

Recall that protests began last week after Zuma handed himself in to police to serve a 15-month sentence for contempt of court.

Zuma’s supporters reacted violently, to his imprisonment, blocking major roads and calling for a shutdown to demand his release.

The protests escalated into riots; businesses in every sector were looted, and house’s burnt in cities and towns across KwaZulu-Natal and Gauteng, which surrounds the country’s biggest city, Johannesburg.