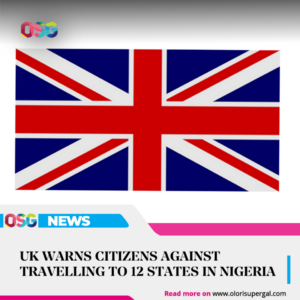 The United Kingdom government has warned its citizens in Nigeria against visiting 12 states in the country over possible terror attacks.

The advisory from the UK through its Foreign, Commonwealth, and Development Office (FCDO) followed concerns on the possibility of terrorists carrying out attacks in Nigeria.

In a statement published on its website “still current at October 16, 2021,” it expressed concern over protests and a heightened security presence in major cities due to the trial of the leader of the Indigenous People of Biafra (IPOB), Mr. Nnamdi Kanu.

The foreign government also urged its citizens to monitor local media, and avoid any demonstrations or large gatherings.

The FCDO also advised against all but essential travel to Bauchi, Kano, Jigawa, Niger, Sokoto, and Kogi and within 20kilometres of the border with Niger in Kebbi State, and Abia State.

The advisory read,  “The groups have previously shown intent and capability to conduct kidnaps in Nigeria. Foreign nationals, including humanitarian workers, are likely targets for kidnap.

‘’Humanitarian hubs and workers have been targeted during attacks in the North East, including Monguno, Borno State on June 13, 2020.

“There’s a high threat of kidnap throughout Nigeria. Kidnaps can be motivated by criminality or terrorism and could be carried out for ideological, financial, or political gain. Anecdotal evidence suggests that the risk of kidnap increases after dark.

It also cautioned UK citizens against travelling to the non-riverine areas of Delta, Bayelsa, and Rivers states.

According to the advisory, events to mark the first anniversary of #EndSARS protests are likely to take place nationally, week commencing October 18.

The advisory further stated “There may be protests and a heightened security presence in major cities such as Lagos and Abuja. In parallel, the high-profile trial date of a separatist leader is also scheduled for 21 October in Abuja. There may be additional protests and a heightened security presence in Abuja and the South-east for this reason. In all areas affected, you should monitor local media, and avoid any demonstrations or large gatherings”.

FCDO noted that from September 3, 2021, the Nigerian government had mandated for all telecommunication operators in Nigeria to stop extending services to Zamfara State.

This, according to the FCDO, includes a suspension of all mobile telecommunications, including WiFi.
It added that a number of other state governments, including Kaduna, Katsina, Sokoto, Kebbi and Niger had also implemented a partial shutdown of telecom services.

The advisory explained that “Since 9 August, there has been an increase in protests and demonstrations in the South-east region of Nigeria. Protests, including “Stay at Home” protests, are likely during October in the South-east region. There have been reports of violence during Sit-at-Home protests previously. You should monitor local media, avoid any demonstrations or large gatherings and follow any instructions from local police and security forces”.

It noted a number of attacks and targeted killings in the South-east and South-south regions, including in the states of Akwa Ibom, Rivers, Imo, Abia, Anambra, Delta, Edo, and Ebonyi.

According to the FCDO, some of these attacks have been on isolated roads and in remote locations.
It, however, added that there is a chance that they could occur in metropolitan areas.

The advisory added that “There is also a heightened risk of indiscriminate attacks on police and security infrastructure, which may inadvertently affect bystanders. A number of states have imposed curfews. Travelers to these regions are advised to exercise caution if travelling in remote areas at night and follow local news and information outlets for further information, including on local curfews”.