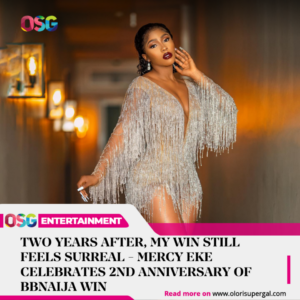 Mercy Eke, the winner of Big Brother Naija Season 4 themed ‘Pepper Dem’ has taken to social media to celebrate the second anniversary of her win.

In a post on her Instagram page, she shared a video of when she was declared winner of the show. She noted in her caption that it’s been two years but her win still feels surreal.

She expressed gratitude to the organisers of the show, MultiChoice Group and DSTV Nigeria. She also appreciates her fans and followers who voted massively for her by turning her dream into reality.

“Happy Winversary to me, Mercenaries and to everyone who turned my dreams into reality”.

Mercy, sometimes referred to as Lambo beat top four finalists – Mike, Frodd, Omashola, and Seyi, to emerge winner of the show which was aired in 2019.