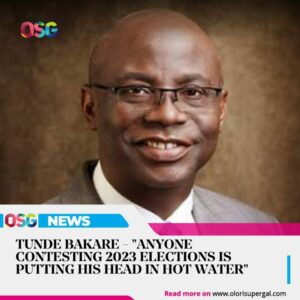 Pastor Tunde Bakare, the serving overseer of the Citadel Global Community Church, has stated that anyone who decides to contest in the 2023 election, is putting his head inside hot water.

He stated this during an interview with Channels Television on Tuesday night.
He went on to reveal that he and a group of Nigerians are building a formidable team, like a shadow cabinet, for the next administration.

He said; “Anyone plunging into the election in 2023 is just plunging his head inside hot water, and therefore you must go with a team and not go alone.

“Very shortly, you will see the formidable team we’re presenting to the nation like a shadow cabinet, these are the men that would do it.

“We are meeting right now. They don’t even understand what is about to hit the nation. It is going to hit it big time in a positive manner”.