TRISTAN THOMPSON HAS BEEN REPORTEDLY FILMED KISSING A GIRL, DAYS BEFORE KHLOE KARDASHIAN’S DUE DATE

Soon-to-be-daddy, Tristan Thompson has been filmed kissing a mystery woman just days before his partner Khloe Kardashian is set to give birth to their baby.

Tristan Thompson was spotted at a club in New York with a woman with straight brunette hair, all locked in conversation, and then making out.

In a video obtained exclusively by Daily Mail, Thompson and the woman are seen locking lips, the woman’s head cocked to the side.

The source who provided the video said Thompson and the woman were making out all night. She said:

I was there and he was on the table right next to us with a group of friends and some girl who he was obviously making out with all night.

They were holding each other and it was so obvious. They were there when I got there and they were part of a big group of friends.

They were talking and being around each other all night. He was texting and talking on the phone and she was obviously looking over his shoulder.

Everybody knew who he was. We talked about it and everybody watched them make out several times.

I have obviously seen him before and people around me were like, “That’s Tristan Thompson, I have seen him on TV”.
No news from the Kardashians yet. 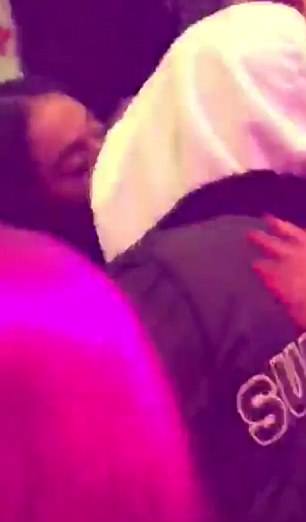