Fire broke out at Trafford General hospital after it was struck by Lightning during the heavy thunderstorm. 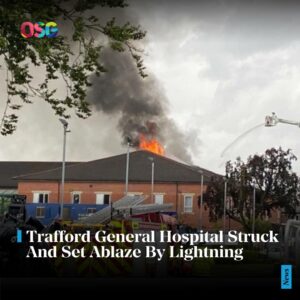 The incident occurred at about 2 : 20 pm, when part of the roof at Trafford General Hospital in Manchester caught fire.

The Foundation Trust reported that patients and staff had to exit the two-storey building.

The fire was put off at about 4:15pm after some significant damages had been caused to the roof space.

The Spokeswomen for the trust said 66 patients were safely evacuated to other parts of the hospital and their relatives were informed.