TONTO DIKEH APOLOGIZES TO HER FRIEND AND COLLEAGUE HALIMA ABUBAKAR 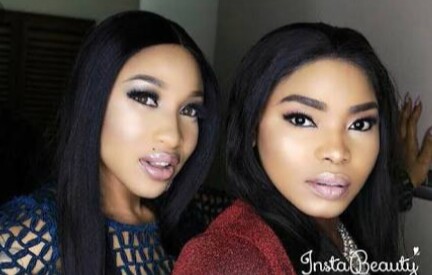 Tonto Dikeh shared a funny encounter she had when she visited Halima’s house. Tonto revealed how she ate all the food in Halima’s fridge and Halima made a fuss about it.This got Tonto angry and caused a kind of rift between them.
It’s no longer news that actresses Tonto Dikeh and Halima Abubakar are best of friends so much so that when Halima was ill, Tonto was the one taking care of her.
Tonto Dikeh however apologized on social media some hours ago.
“Sending Postive vibes to my Ex girl @halimabubakar I’m so mad at her,People pls help me judge this matter.. I visted Halima and in her fridge were some yummy meat pies and shezz..I was so hungry I ate it all and halima had the guts to tell me that I EAT TOO MUCH..(In her words ah ah you know no say na person house you Dey,You NO SABI Dey FORM.YOU JUST EAT ALL MU FOOD) Kia I was sooooo ashamed and comically hurt and switched to DIVA MOOD… Like really,For heavens sake am a guest and that was rude.So I left called her Once and never called again and She is very sturborn tooo she never called . After seeing her near death story ha i was Shook..I say make I apologise.. HALIMA I WIL NEVER EAT YOUR ICE CREAM AND MEAT PIE AGAIN WITHOUT YOUR PREMISSION… Hally boo boo Issa hot mess.. My extremely emotional somebody I’m sorry for real boo, I was hungry ma Nigga Get well soon”. Halima of course replied lovingly that she was waiting for who would get tired of keeping malice first. Aren’t they wonderful friends?