Another Nigerian athlete, Divine Oduduru, has been disqualified from a 100m race, at the ongoing Tokyo Olympics. 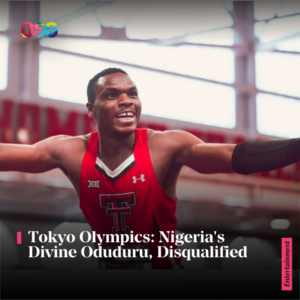 The 24-year-old, was to compete in the fifth heat of the race but he was disqualified over a false start.

Earlier today, Blessing Okagbare was suspended from the games after she failed a drug test.

Nigeria’s senior men’s basketball team, D’Tigers, also crashed out of the Tokyo 2020 Olympics Games after losing 71-80 in their last Group B game on Saturday.

Although they had rounded off their pre-Olympic preparations with impressive wins over the U.S. and Argentina, they put up epileptic performances at the Olympics.

Recall that three days ago, ten Nigerian athletes were banned from the games.