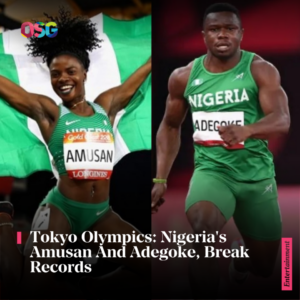 Nigeria’s Enoch Adegoke and Tobi Amusan have broken the country’s records in athletics.

He broke a 25-year record after Davidson Ezinwa at Atlanta in 1996.

On the other hand, Amusan, wins her first semi-final in 12.62s to become the first Nigerian since Glory Alozie at Sydney 2000 to qualify for the 100m Hurdles final at the Olympics.

It was a tight race for the men’s 100m semis, which ended in a photo-finish, with Adegoke ending up in second place in 10.00secs, the same time as American T. Brommell, with Great Britain’s Zharnel Hughes, who clocked 9.98secs, in the first place.

Compatriot Usheoritse Itsekiri crashed out in the semi-finals of the men’s 100m after he finished seventh in his heat in 10.29secs.