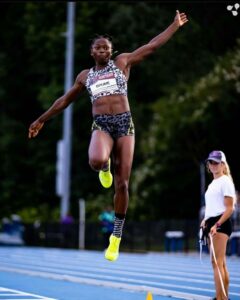 After suffering setbacks in the last few days, Nigeria’s Ese Brume, has won the first medal for the country at the ongoing Tokyo Olympics 2020.

After the disqualification of Ruth Usoro by the Athletics Integrity Unit, Brume became Nigeria’s sole representative in the jumps on Tokyo.

The 25-year-old, with her best leap of 6.97m, secured the bronze behind World champion Malaika Mihambo who snatched the gold with her very last jump of 7.00m.

Brume, who is the African record holder in the women’s Long Jump event, qualified for the final stage on Sunday with a jump of 6.76m; 1cm more than the required mark.

She finished with the fourth overall best jump among the finalists but stepped up her game in Tuesday’s final to win bronze medal.

This is Nigeria’s first medal in athletics at the Olympic Games in 13 years.

Brume, was the only Nigerian athlete who reached the final of her event at the 2016 Olympic Games in Rio, where she placed fifth with a leap of 6.81m.

She was also Nigeria’s only medalist at the last World Championship in Doha in 2019, where she also won a bronze.

At the 2016 Olympic Games in Rio, Brume, was the only Nigerian athlete who reached the final of her event, where she placed fifth with a leap of 6.81m.