Tiwas responds to Rumours Concerning her and Wizkids relationship

Earlier today popular “Kele kele” singer, Tiwa Savage, was seen to play the role of a “Video Vixen” in Wizkids new video, Fever. The two have been rumoured to be dating for a while and the music video kinda confirmed peoples suspicions. The two celebrities were up close and intimate in the video which had people asking if it was real or a mere publicity stunt.

The sugar cane singer took to her Instagram page to send a message to people who questioned her relationship with Wizkid. See post below- 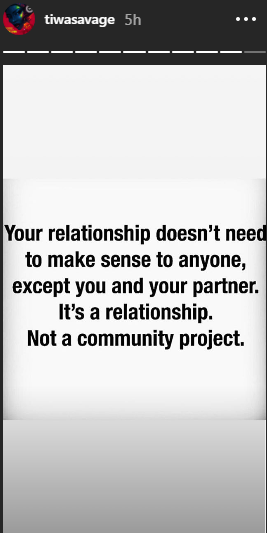 The singer is telling people that her relationship is private and not a “Community project”. We can’t wait to know what is really going on.

Who Are You More Excited To See ...