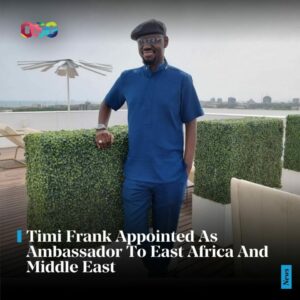 The Former Deputy National Publicity Secretary of the All Progressives Congress (APC), Comrade Timi Frank, has been appointed Ambassador to East Africa and the Middle East, by the United Liberation Movement for West Papua (ULMWP).

The acting president of ULMWP, Benny Wenda, in the letter of appointment to the Bayelsa-born political activist, said Frank is needed by the people of West Papua in diplomatic, humanitarian, financial, and political realms.

He noted that his appointment will help to liberate the last colony of the Black African race: West Papua.

Wenda further said, “we need you, to convince the African people, who have shared in our experience of racism, discrimination, and colonialism, to support our people’s Black liberation struggle against Indonesian imperialism.

“Your work will bolster the resolution on West Papua passed by the Organisation of African, Caribbean and Pacific States in December 2019.”