It has been announced that , Senteni Masango, the eighth wife of King Mswati III of Swaziland, has allegedly committed suicide after taking an overdose of a pain relief medicine. Her lifeless body was said to have been found in the room. 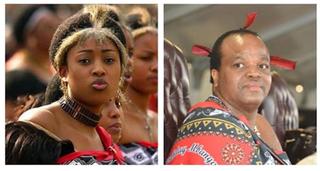 According to an online publication, the king’s wife is believed to have overdosed on about 40 amitriptyline capsules – widely used to block the long-term (chronic) pain of some rheumatic conditions and treat depression and related disorders.
King Mswati III got married to the deceased in September 1990 when she was just 18 years old.

It is a tradition for the Swazi King to choose a wife every year.

In Swaziland, tens of thousands of unmarried and childless girls and women travel from the various chiefdoms to participate in the eight-day event during which the king selects a new bride, and would-be brides are publicly checked to ascertain their virginity.

The king, who was crowned at age 18 is now aged 50, and is known as Ngweyama the lion.

“ANTHONY JOSHUA HAS NOT IMPRESSED ME”- MIKE ...