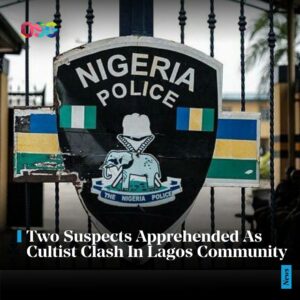 The rivalry Cultistist engaged in a fight in the Badagry/Ijanikini axis last month and five persons were reported to have died in the clash.

The Spokesman, Olumuyiwa Adejobi, in a statement said “normalcy was immediately restored to the area and no life was lost in the recent clash.

“The suspected cultists apprehended are Taiye Israel and Isiaka Afeez. Items recovered from them include one axe, some cutlasses, assorted charms and weeds suspected to be Marijuana.”

He further explained that “The Commissioner of Police, Lagos State, CP Hakeem Odumosu, has ordered that the suspects be transferred to the command’s Strike Team, Ikeja, for proper investigation and possible arrest of other members of the gangs”.

He directed the Divisional Police Officer
In charge of Ijanikin to step up his anti-crime strategies in curbing crimes and criminality, especially cultism, in his area of responsibility.