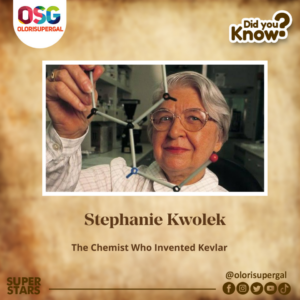 Stephanie Kwolek was born on 31st July 1923. She was the daughter of two Polish immigrants. Her father was an amateur naturalist whom she learned her love of science from, on their long walks through the woods together, identifying plants and wildlife.

He passed away when Kwolek was just ten years old.

She learned her love of textiles and fiber arts from her mother who was a seamstress. At a young age, she considered a career in fashion, but her mother warned that she was too much of a perfectionist to be a designer. Instead, Kwolek chose chemistry, a field for perfectionists if there ever was one. 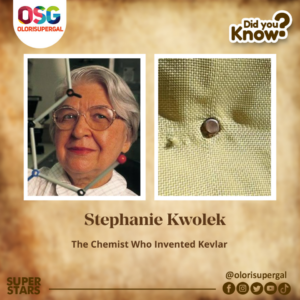 It seems perfectly logical that she would end up as a textile chemist, but that wasn’t Kwolek’s original plan. After receiving her bachelor’s degree in chemistry in 1946, she was looking for a temporary job to help her raise the money for medical school. But in the lab, Kwopek became fascinated by polymer chemistry and decided to stay.

Nine years later, in 1965, Kwolek was trying to develop light, strong, rigid fibers to replace the steel wires used in car tires at the time. DuPont, a chemical company Kwolek was working with could see a gasoline shortage looming (it finally hit with a vengeance in 1973) and engineers thought a lighter, stronger material in tires could help improve cars’ gas mileage.

Kwolek’s workday at the lab consisted mostly of dissolving long chains of molecules called polyamides — the same type of synthetic polymer used to make materials like nylon — and then running the solution through a machine that would spin it into a fiber. At the time, the molecules DuPont was working with had to be melted at nearly 400 degrees Fahrenheit to be spun, and the heating made the fiber too weak and floppy for the job DuPont’s engineers had in mind. Kwolek’s job was to find a version that could be spun at lower temperatures.

Even Kwolek was surprised when a batch of dissolved polyamides produced a milky, runny liquid solution instead of the clear, syrup-thick solution she expected. But instead of throwing it out as a bad batch or rejecting that molecule as a nonstarter, the chemist whose mother had once told her she was too much a perfectionist decided to give the weird, cloudy solution a try. The result was the strongest, stiffest fiber anyone had seen so far. Today, most of us know it as Kevlar.

Kevlar works because, under the right conditions, the molecules arrange themselves end-to-end, parallel to the length of the fiber, and form strong hydrogen bonds between the molecule chains. The resulting material is five times stronger than an equal weight of steel but lighter than fiberglass, and it could withstand high temperatures.

Kwolek had developed exactly the material her bosses at DuPont were looking for, but it turned out that she’d done even more than that. Bulletproof vests and body armor made from Kevlar and related materials have saved the lives of thousands of armed service members, law enforcement officers, and others over the last few decades. The material is also used in the boots that firefighters wear with their bunker gear, in spacecraft components, in the gloves that protect cooks’ fingers from kitchen knives, and in skis, tennis rackets, and ropes.

After her discovery, Kwolek spent the next 20 years at DuPont, which put her in charge of polymer research at its Pioneering Lab. She retired in 1986 but continued to consult for her old employer, while also serving on committees for the National Academy of Sciences and the National Research Council.