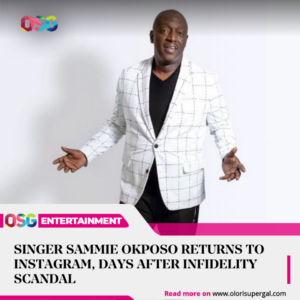 Scandalous Nigerian gospel singer, Sammie Okposo who came under fire a few days ago after he tendered a public apology to his wife, Ozioma after he cheated on her with a lady on a trip to the US in 2021.

His apology came barely 24 hours after a lady by the alias African Doll accused him of impregnating her.

According to the lady, she met the singer in Dallas, United States of America, during one of his tours.

They became close and started an affair which led to the pregnancy. Things became sour after she informed the gospel singer that she was pregnant.

However, in a twist of event, on Monday, 31st January, the Welu Welu master posted a long explanation of God’s word and noted that he was now free from the power of sin.

“I am the righteousness of God in Christ. I am born of God the life of God is in me; Christ in me the hope of glory I am free from the law, from the power of sin. I am no longer bound by the fear of men.

“God’s grace is available sufficient and working for me. Jesus already saved me not because of any works of righteousness that I have done, but because of His own compassion and mercy, by the cleansing of the new birth (spiritual transformation, regeneration) and renewing by the Holy Spirit.”