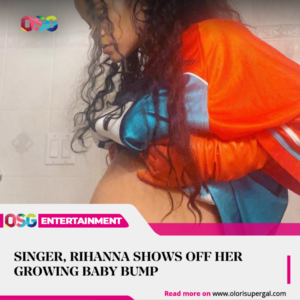 Barbadian singer, Rihanna took to Instagram to show off her growing baby bump in a new post.

News of her pregnancy broke the internet on Monday when pictures of Rihanna and her lover, A$AP Rocky emerged.

The duo was photographed in Harlem as Rihanna displayed her baby bump in loved-up photos with her lover, who is also an American rapper.

In the new photo, the 33-year-old, raised her top to take a photo of her growing belly from the side.

In her caption, she wrote,

“How the gang pulled up to black history month.”

Rihanna’s father, Ronald Fenty, had earlier expressed his excitement over the news, adding that his daughter informed him about the pregnancy on Sunday night.

On Monday he said,

“I just got the news from her last night, and she sent me some photos. I’m just over the moon. She’s beautiful inside and out.”

He added, “I’m ecstatic. I’m so happy that I jumped for joy. I’m still so excited.

“Rihanna always said that she wanted children, she loves kids. She always takes care of her cousins’ kids…she’s going to be a good mum.”

declared a national hero of Barbados by Prime Minister Mia Mottley. She was honored during a ceremony marking the country’s new status as a republic.

Rihanna, who was previously named ambassador to Barbados in 2018, received “the order of national hero” during the event in Bridgetown.