Singer, Davido Calls Out His Cousin For Planning To Contest Against His Uncle 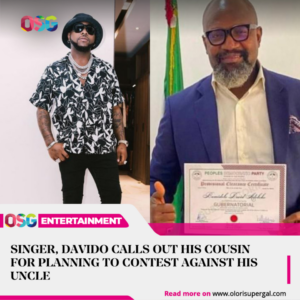 Award-winning singer, David Adeleke, better known as Davido, called out his cousin, Bamidele Adeleke, for declaring his interest to run in the Osun State gubernatorial election in 2022.

The Champion Sound crooner took to his Twitter page to share a picture of his cousin, where the latter posed with a provisional clearance certificate for the Osun State gubernatorial election under the Peoples Democratic Party.

In his tweet, the singer noted that his cousin struggled to graduate with a Second Class (Lower Division) and has not succeeded in building “one single thing in his life on his own.”

“Wonderful! I finished university with a 2:1. But it’s now cousin Dele who struggled to even get a 2:2 that is now forming ‘intellectual’.

“Intellectual that has not succeeded in building one single thing in his life on his own. This life! Osun, beware of fakes!”

In December 2021, it was reported that Davido’s uncle, Senator Ademola Adeleke submitted his gubernatorial nomination form at the PDP office, as he also made his governorship ambition known.