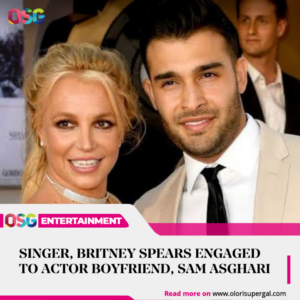 American singer and songwriter, Britney Spears, has announced her engagement to her boyfriend, Sam Asghari with an exuberant post displaying a diamond ring engraved with the word “lioness”.

This comes days after her father filed to end the court conservatorship that has controlled the singer’s life and money for 13 years.

The 39-year-old has been fighting a legal battle to end her 13-year conservatorship, which controls both her personal life and finances.

Spears has revealed that the terms of the arrangement are preventing her from marrying Mr. Asghari, 27, or having more children.

The conservatorship arrangement was imposed in 2008 when concerns were raised over the singer’s mental health.

A court hearing is scheduled for 29 September. Spears had sought to remove him from the role twice in the last two years.

Spears has been married twice before. In 2004, she wed her childhood friend Jason Alexander in Las Vegas but the marriage was soon annulled.

Later the same year, she married dancer Kevin Federline, with whom she has two children. The couple divorced in 2007.

Spears has previously referred to her father’s treatment of her as “cruelty”.

In explosive testimony in June, she asked a judge to end the “abusive” conservatorship so she could get married and have more children.

A month later, she said she wished to file charges against her father.

The court-ordered conservatorship gave Jamie Spears control over his daughter’s estate and other aspects of her life.

Mr. Spears stepped down as the conservator of his daughter’s personal affairs in 2019 due to health issues and was replaced by Jodi Montgomery, the singer’s long-time care manager.

However, Mr. Spears continues to oversee his daughter’s business arrangements.