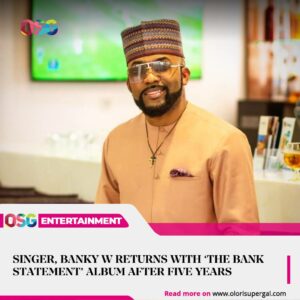 Nigerian R&B star, Olubankole Wellington, better known as Banky W has disclosed that he has concluded recording his forthcoming album, The Bank Statements after five years off the music scene.

The Yes/No crooner made the revelation during a conversation on the YouTube channel with pastor and certified relationship coach, Kingsley Okonkwo. Banky also talked about the scope behind the album, which he said has a song for every month of the year.

He said, “I’ve taken some years off. I heard somebody once said that artistes never retire; they just stop when they no longer have any stories to tell. And I’ve just lived a lot of lives in the last few years that I have been quiet in the music scene. I have a lot of stories to tell, about love, relationship, about God, about country, about life.”

I have recorded what I feel is a life about; it’s called ‘The Bank Statements’. If you think about your bank statement from January to December, it’s kind of a snapshot of your life. What is important to you, what you are spending on? If you look back to your bank statement of last year, it will just give you what your life is”.

Explaining the concept behind the new project, Banky W who has not released an album since his 2013 classic titled R&BW, said “the album is called the ‘Bank’s Statement’ because it’s Banky’s statement and also conceptually, and there is a song for every month of the year.”

“So there is a January and December song because you have to start and end the year with God. There is a February song, which is Valentine’s Day; it is a love song to my baby. My birthday is March, so there is a turn-up kind of song for my birthday. The ninth song of the album is for our son because pregnancy takes nine months and it’s called ‘Champ Song’.

“It’s a very intentional, thoughtful, creative, and powerful album. It’s actually my favourite record because now I can sing about love from a place of currently experiencing it”. the former E.M.E boss stated.

Speaking about the evolution of his former record label Empire Mates Entertainment (E.M.E. Music) from a record label to a media agency, Banky W said,

“E.M.E stopped the record label business in 2017. We actually pivoted into a media and marketing agency. We work with corporates, influencers, and advertisers. What people don’t know is that we are worth so much more as an agency than we ever were as a record label, even at the height of our success.”