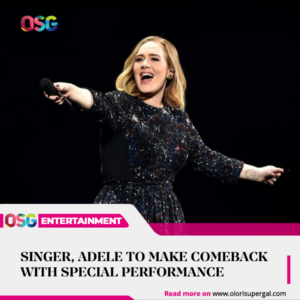 English singer and songwriter, Adele, who recently sent fans wild by unveiling her long-awaited new music, is set to make her come back with a special performance show for ITV.

The 33-year-old singer has recently unveiled her long-awaited new song Easy On Me, which is set for release on 15th October.

The Someone Like You singer is in advanced talks with a broadcaster about starring in an ‘Audience With’-style programme to showcase the new songs.

It comes after the last time she released new music back in 2015 with her album 25, she featured in a one-off special singing the new hits called Adele at the BBC.

The show was hosted by talk show sensation Graham Norton and saw the Hello songstress performing her third album hits live with a band.

A media outlet, citing a source, claimed: ‘Adele at the BBC was the music television event of the year, and they’re keen to get all over her comeback which is the talk of the industry.’

It has been reported that Adele’s show is being produced by Fulwell 73, who also created James Corden’s popular US series The Late Late Show. The singer and Fulwell have previously worked together when she starred in James’ Carpool Karaoke skit.