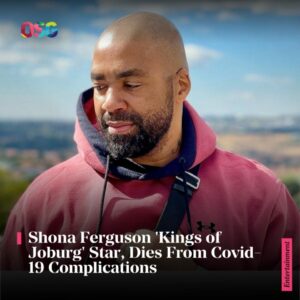 According to reports, the media mogul, was admitted at Netcare Milpark Hospital in South Africa, two weeks ago, where he was being treated at the ICU after he was diagnosed with Covid-19. Sadly, he passed away on Friday, 30th July.

Born Aaron Arthur Ferguson in Gaborone, Botswana, he was famous for roles in popular television shows ‘Muvhango’, ‘Isidingo’ and ‘The Queen’.

In 2020, Ferguson’s film Netflix partnership ‘Kings of Joburg’ premiered on the streaming platform.

The actor who doubled as show creator starred as Simon “Vader” Masire, one of the ruthless Masire brothers controlling Johannesburg’s crime underworld.

Reacting to the actor’s death, Netflix SA shared on Instagram: “We are saddened to hear the news of the passing of Shona Fergurson.
As a fixture in the entertainment industry and a hero of black stories he will be missed. Our thoughts are with his family and friends. Once a King, always a King.”

The 47-year-old actor was married to actress and filmmaker Connie Ferguson, they have two daughters.

They founded Ferguson Films and had just announced the launch of its acting academy.