Sarah Rector was the richest black girl in America in 1913. She was born on March 3, 1902, in what was known as Twine, Indian Territory; modern-day Taft, Oklahoma. 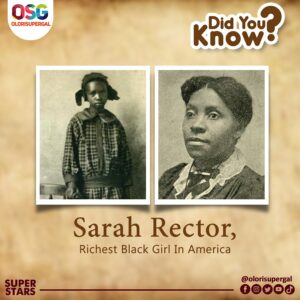 Listed as freedmen, they were entitled to land allotments under the treaty. Hence, about 600 freedmen minors were granted land allotments. This was a mandatory step in the process of integration of the Indian Territory with Oklahoma Territory to form what is now the State of Oklahoma.

Sarah was 11-year-old at the time she was allocated 64 hectares of land which was regarded infertile and not suitable for farming.

A $30 annual property tax on Sarah’s land was a burden that her father petitioned the Muskogee County Court to sell the land. His petition was rejected, and he was compelled to continue paying the taxes.

Her father rented out the land in 1911 to cover up its expenses. However, in 1913, oil was discovered in excess on the land, and it produced about 2500 barrels a day.

At that time, the law required Indians, black adults, and children who were citizens of Indian territory with significant property and money, to be assigned, well-respected white guardians. Because of this, there was pressure to change Sarah’s guardianship from her parents to a local white resident named T.J. Porter.

At age 12, Sarah began to receive requests for loans, money gifts, and marriage proposals.
Oklahoma Legislature made an effort to have her declared white; allowing her to reap the benefits of social standing, such as riding in a first-class car on the trains.

By the time she turned 18-years-old, Sarah was already a millionaire. She owned stocks, bonds, a boarding house, businesses, and a 2,000-acre piece of prime river bottomland.

Sarah had three sons from her first marriage to Kenneth Campbell. She died on July 22, 1967, at the age of 65.