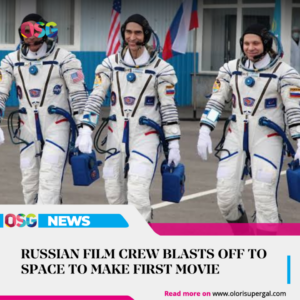 Russia, the largest country in the world, has launched an actor and a film director into space to make a feature film in orbit.

A Soyuz rocket-carrying actress Yulia Peresild and filmmaker Klim Shipenko, as well as cosmonaut Anton Shkaplerov, lifted off just before 5 a.m. Eastern time from a launch facility in Baikonur, Kazakhstan.

It docked at the International Space Station “after just two orbits around the earth,” Russia’s space agency Roscosmos said in a tweet shortly after 8:00 Eastern time. “Welcome to the ISS!”

The passengers will spend about 12 days at the ISS, shooting about 35 minutes of the film, which has the working title “The Challenge.” Peresild will play a doctor who has to race to save the life of a crew member in space, according to the space agency’s website for the project.

Peresild, who was chosen from thousands of applicants for the role, has previously described the project as “a miracle, an incredible chance.”

Training for the film was “psychologically, physically and morally hard,” she told a news conference on Monday, in quotes carried by the Associated Press. Meanwhile, Shipenko lost 33 pounds while preparing for the flight, Roscosmos said.

Two Russian cosmonauts who are already on the ISS — Oleg Novitskiy and Pyotr Dubrov — are also expected to feature in the film, with Novitskiy set to return to Earth with Peresild, Shipenko, and Shkaplerov later this month.

The country announced its cosmic moviemaking ambitions last year, shortly after NASA said it would work with Tom Cruise on a film on the ISS.

Nick Cannon Plans to Be Celibate After ...