RE: SLAVES IN HIGH PLACES by UCHENNA NKEMAKOLAM OKORIE

Perhaps my thoughts are straying and refusing to stay connected to a single interpretation to the horror coming out from Libya. Slaves! The images evoke a frisson of annoyance in every human around the world that has a soul. And in response, the world has come unbridled in unanimous condemnation of the horror. From the United Nations general headquarters to every social media account on the internet people see this as evil. However, while the discussion dominates the mainstream media, not many have bothered to ask questions that could cut deep into the root cause. The root cause, as platitude, as it may seem, if trended and made to go viral in juxtaposition with the images from Libya may become our turning point.

There is a direct cause and effect relationship between these incidents in Libya and the raping of the commonwealth by thieving politicians in Africa, Nigeria in particular. We call these impecunious Youths slaves because the images evoke a memory of black slaves in white farms. However, the real slaves are dressed in agbada with a briefcase in their hands and walking the corridors of power all over Nigeria and Africa. Why would a poor young man or woman in Lagos who has access to $10,000 (whether by borrowing or personal savings) trade all that money for a dream life in Europe or America? Why would they consider that money to be of less value with them in Nigeria even at the risk of potentially losing their lives while trying to cross through the Mediterranean and Sahara desert? Similarly, why would a politician steal public fund and not just that, but also ship it off to a foreign bank account in Europe or America. Why do they consider Europe and America a safer heaven for investment as opposed to Nigeria? Why can’t they just simply steal the money and invest it in Nigeria? In these questions lies the slave!

On the one hand, the intrepid young man or woman who unfortunately became a slave while trying to cross from Libya may have been goaded by a noble intention. Having been fade-up with the morass and cesspool of a system that is built to ineluctably frustrate his grits in Nigeria or wherever he is from in Black Africa, he is willing to brace the odds in search of a better condition abroad regardless of the cost. He intends to pay whatever price to make a better life for himself, siblings and children. On the other hand, the politician steals public funds and ships it off to his private bank account abroad. Intention is immaterial in this case. There is no such thing as a genuine public fund looter. He is a pernicious slave! Bob Marley called it mental slavery. Whether mental or not, a slave is a slave. As a president, Governor, senator or whatever, political leadership position, you’ve got to be completely cortically atrophied to not feel the embarrassment these images are to a people. You’ve got to be a slave to always embark on the medical trip abroad when the facilities can be bought and built with taxpayers’ money onshore. Nigerians, Africans die in their numbers for minor medical issues due to lack of facilities. The politicians happily fly the distance to get abroad and pay huge sums for medical treatments. Is this not slavery? Wouldn’t it be more dignifying to get the treatments in your home country? In spite of honourable invitations and offers, Nelson Mandela refused this kind of slavery even at his weakest and frailest moments. 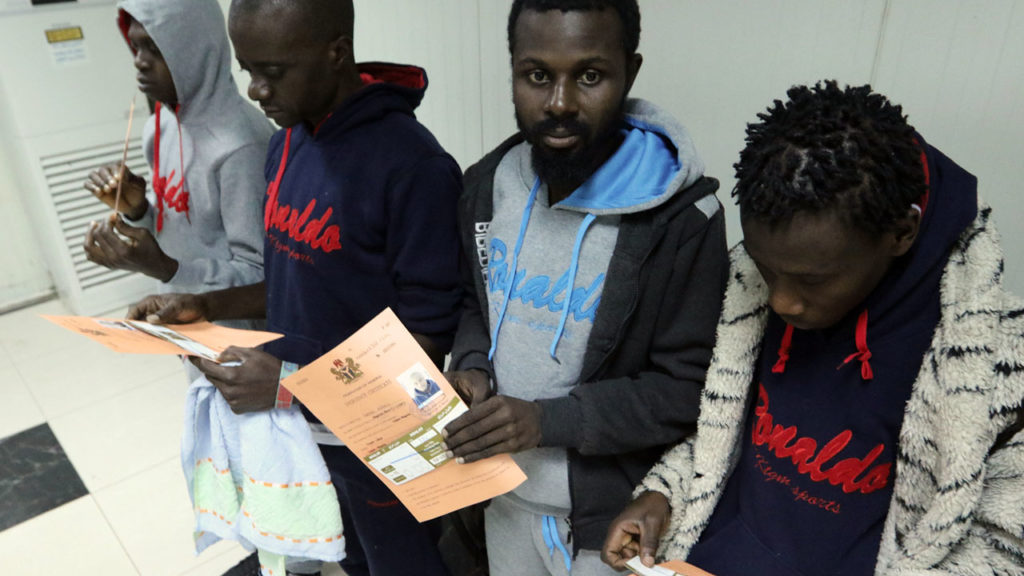 Migrants hold their emergency certificates at the Metiga Airport in the Libyan capital Tripoli on March 11, 2016 ahead of their repatriation to their countries of origin by the Libyan authorities.
The formalities for their departure were organised by the Libyan authorities and the mission of the International Organisation for Migration (IOM). Before embarking, their personal belongings, which were confiscated at the time of their arrest, were returned alongside a boarding pass. / AFP / MAHMUD TURKIA

There are millions of dollars of stolen public funds hidden in cash in reservoir tanks, underground and ikoyi houses all over Nigeria and Africa. Rather than invest this money back into the economy and create jobs these slaves would rather export it or excavate the earth to hide it. While on a visit to Brussels sometime in 2015, I met a young man from a French-speaking African country who told a story that almost half of the real estate properties in that city are owned by his president. These slaves in high places are not only in Nigeria. They dominate African politics. They run all exclusive economies. One in which the political class shares and enjoy the commonwealth in complete exclusion of the masses. In contrast, the western countries where these youths strive to migrate to all have the opposite in common. They run all-inclusive economies where everyone is given a fair shot to be all they can attain. During the 2007-2010 GFC for instance, governments in these climes crashed interest rates to below 1% and even presently interest rates are still maintained at single digits. Smart daring youths can gain access to finance and fund their ambitions. Some of these have added jobs in large numbers to their economies. On the flip side, the interest rate remained and is still in double digits in these countries run by slaves. In Nigeria, the lending rate was and still ranges between 20 to 30% and to access it you must deposit something close to a human head. If the stolen funds are reinvested into the local economy it may rub off positively on the local economic dynamics. Government spending, salaries and income earnings are the major contributory factor to the GDP. If these funds stolen from government purse are invested (spent) locally, they will create jobs, provide the opportunity for income earning and rub off on the quality of life of the people. Half of these migrating youths would have been meaningfully engaged at home and perhaps Libya slavery would not happen.

And to the young men and women in Africa, we have been guilty of this crass by contributory negligence. We have neglected our wellbeing and the wellbeing of our future for far too long by allowing ourselves to be played by these slaves. They ensnare us through politics of tribal sentiments and we buy it hook line and sinker. They make us think that we come from the same region and therefore should vote them.

We must begin to rethink our future. There are only two tribes in Africa. They and we, and we must begin to accept that. Think about it, they say they are from different tribes but after voting them into power, they go off to London and Dubai to buy houses in proximate locations and become neighbors. They patronize the same hospitals in London and America. They fly the same first class or private jets. They attend the same social functions where they wine and dine happily together as if they are the conquistadors. As the next round of elections approach, we have a choice to either throw these malfeasances out the door or be once again subjugated by politics as usual. They will dominate the major political parties but in the midst of the small parties, there will be one of us; someone who understands the economics of nation-building. Andrew Carnegie surmises it aptly, the growth and development of people is the highest calling of leadership. In 2019, let’s cast our votes to someone who understands this maxim both intellectually, morally, experience and by conduct. There is absolutely nothing wrong if you collect their money and still vote your choice. It is not their money. It is your money! Collect it but do not vote because of it. Vote your choice!