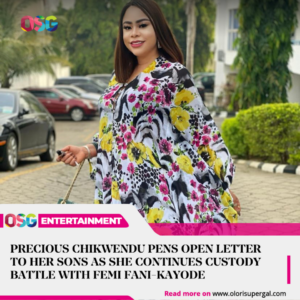 As the custody battle continues between former beauty queen, Precious Chikwendu, and the former Minister of Aviation, Femi Fani-Kayode the latter has penned down an open letter to her sons.

In her lengthy post, the mother of four shared her desire to have “eye contact, winks, grins, warm kisses, and awaken PJ dances” with her children, revealing that she is continually praying to be reunited with them.

“Today the 4/1/2022 I woke up so upset in my spirit. I’ve tried so hard to overlook certain treatments to you that has now become a norm which evidently is so unfair to you.

“The world and you have been told your mother s insane and incapable of looking after you, but your best moments were obviously with your mother.

“You weren’t caged like pets that are only to be displayed and not allowed freedom. At two years , you all were already walking as I made sure you were allowed freedom to ambulate and strengthen your limbs.

“Now I have to helplessly watch you all stagger whilst trying to walk with nannies and strangers at every visit carrying you in every pictures like handicapped kids .

“I can share lots of videos that I personally made with the three of you running around both on ground and in a pool with your legs strong at 2years including these one I’ve got on this post.

“You will be 4years in 4months and still can’t be allowed to stand in pictures or feed yourselves? I am not even getting started on the trauma you are all managing unconsciously, wondering if you would ever see your mom again. As a your mother, this is troubling let alone for toddlers.

“I pray every second for each one of you Aragorn, Ragnar, Adien, and Liam.

“You all are connected to me in spirit and i know you can feel my presence drawing closer seconds by seconds. Soon my boy, soon you would have that very constant love, eye contact, winks, giggles, warm kisses, and wakeup pajamas dances that only mama gives you.

Recall that Miss Chikwendu and Mr. Fani-Kayode have been entangled in a custody battle over their kids since they divorced.

Ms. Chikwendu had dragged Mr. Fani-Kayode to the Customary Court of the Federal Capital Territory to seek custody of their four children.

Abiodun Olusanya of Emeka Uchegbulam and Co, Chikwendu’s lawyer, said the court ordered the divorced couple to come up with a plan to allow the children’s mother to see them during the Yuletide season, pending the conclusion of the dispute.

According to Olusanya, Fani-Kayode received a letter from his lawyer, Adeola Adedipe, requesting that the children be seen on December 18th, December 25th, and January 8th from 9 a.m. to 6 p.m. in Central Park in Abuja.

Chikwendu, who visited Central Park on December 18 from 9 a.m. to 6 p.m., did not see her sons because they were not brought to her.