Popular award winning stripper turned rapper, Cardi B is engaged to Offset of rap trio Migos and they are both expecting a baby. 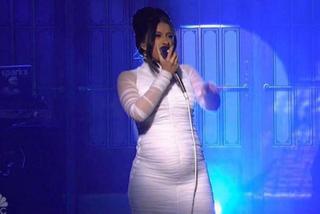 Offset, shortly after his fiancee’s television appearance confirmed her pregnancy on Instagram, writing, “We feel so blessed.”

Cardi B, a Bronx native whose real name is Belcalis Almanzar, has quickly found stardom with her “Bodak yellow” which gained public acclaim.

She raked in top prizes including single of the year at last year’s BET Hip Hop Awards, leading to high anticipation for her debut album — and she is not letting the pregnancy slow her down.

The rapper is due to perform next weekend at Coachella, the premier US music festival.

Cardi B is said to be due to give birth in early July.