A 36-year-old woman was last week rescued by the police after she collapsed and became unconscious at Ikolaba area of Ibadan, the Oyo State capital, around 8.30p.m. Though the cause of her collapse was unknown to passersby, many of them were said to have been reluctant to help the single mother of three out of fear. 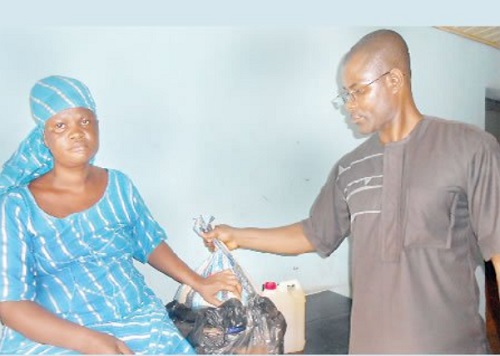 According to Tribune, one of the passersby summoned courage, moved close to the woman and tried to resuscitate her by pouring cold water on her, all to no avail. Eyewitnesses at the scene then put a call through to the Police Public Relations Officer (PPRO), Mr Adekunle Ajisebutu, who immediately went to the scene and also alerted the Divisional Police Officer (DPO), Ikolaba Division.

The PPRO was said to have asked the DPO to deploy a patrol team to the scene, after which the woman was rushed to the nearest hospital.

Upon regaining consciousness, the 36-year-old labourer said there was nothing wrong with her medically, but that she collapsed because she was hungry and had not taken anything in two days.

Speaking feebly on the hospital bed, the woman said: “I am a labourer, and I had gone to the Wema area, in Iwo Road, where labourers normally converge daily for menial work, but for the past one month, I have not done any work.

“On the day I collapsed, I was returning home to Ijokodo, Sango area, and was trekking back like I did in the morning when I went in search of a job. I didn’t eat the previous day because I had nothing, and I prayed I would get a job that day, but it wasn’t to be, so as I was trekking back home, I became weak around Ikolaba area, and fell to the ground,” Tawakalitu said.

Metro learnt that Tawakalitu’s husband, a cab driver, had abandoned her and their three children, and she is left to fend for the children alone.

Tawakalitu is, however, grateful to the PPRO and the policemen who rescued her, saying she could have died if not for their timely response to the calls made to them by good Samaritans.

During his visit the woman at the hospital on Saturday, the PPRO commended members of the public who called to draw the attention of the police to Tawakalitu’s plight.

Also moved by the story of the woman, the PPRO donated food items and an undisclosed amount of cash to her, while praying to God to help her get a more decent and rewarding job.

The Director of Salaudeen Memorial Hospital, Ikolaba, where Tawakalitu was rushed to, Dr Rashidi Olasunkanmi Salaudeen, said the 36-year-old woman could have died if help had not come her way on time.