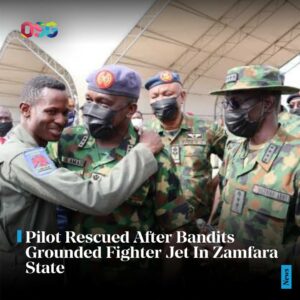 The Director of Public Relations and Information, Nigerian Air Force, Air Commodore, Edward Gabkwet, who confirmed the crash in a statement on Monday, said Dairo was returning from a successful air interdiction mission between the boundaries of Zamfara and Kaduna states on 18th July, 2021, around 12.45 pm, when the aircraft came under intense enemy fire attack and crashed.

He said that Dairo escaped when he ejected from the aircraft before it crashed, adding that when he landed, the armed bandits gave him a hot chase.

Using the cover of darkness and his phone set for navigation, Flight Lieutenant Dairo was able to elude several bandits’ strongholds and maneuvered his way to a Nigerian Army Unit, where he was finally rescued.

Gabkwet further noted that despite the setback experienced on Sunday, the NAF remains committed to fulfilling President Buhari’s directive to the Armed Forces of Nigeria, to do all it takes to flush out criminal elements in Katsina, Zamfara and Kaduna states.