The Bishop Charles H. Ellis III, who officiated at Aretha Franklin’s funeral came under fire for groping singer Ariana Grande shortly after her performance at the event.
Bishop Ellis had invited Grande to the podium, and made sexually awkward jokes. He also appeared to severally grope the singer’s under boobs. 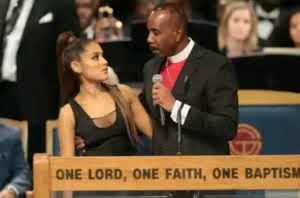 Ellis has however apologised for his actions after public outrage saying, “It would never be my intention to touch any woman’s breast” he told The Associated Press at the cemetery where Franklin was interred late Friday.
“I don’t know I guess I put my arm around her. Maybe I crossed the border, maybe I was too friendly or familiar but again, I apologize. I personally and sincerely apologize to Ariana and to her fans and to the whole Hispanic community. When you’re doing a program for nine hours you try to keep it lively, you try to insert some jokes here and there,” he said