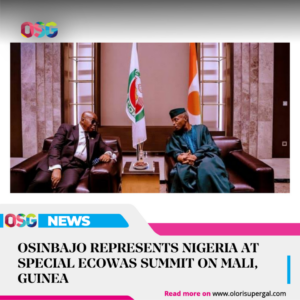 Vice President Yemi Osinbajo represented President Muhammadu Buhari at the Extraordinary Summit of the ECOWAS Authority of Heads of State and Government in Accra, Ghana.

The summit, which was held on 7th November deliberated on the political developments in the Republics of Guinea and Mali.

The meeting, third of such this year, assessed previous resolutions and further reviewed the political situations in both nations.

According to a statement by his spokesman, Laolu Akande, the Vice President had participated in the second ECOWAS Extraordinary Summit on the same matter September 16 in Accra, Ghana.

Before that, he also attended a virtual ECOWAS Extraordinary Summit, which was held on September 8 on the same agenda.

ECOWAS leaders in the communiqué issued at the end of the last special summit in Accra had, among other resolutions, decided to freeze the financial assets of members of the military junta, place a travel ban on them, while also demanding that the coupists return Guinea to constitutional rule within six months.

Nigeria’s position on the situation in Guinea was restated by Osinbajo, urging for the unconditional release of President Alpha Condé and pressure on the country’s military leaders to return the nation to democratic rule.

He had equally commended the efforts of stakeholders in Mali and reiterated the need to strictly respect the electoral timetable for transition to civil rule.

At the virtual event earlier, the Vice President canvassed punitive measures and preventive steps towards addressing military intervention in civil rule in the region, including that the United Nations (UN), African Union (AU), Commonwealth, and other relevant or related financial institutions act in unity simultaneously “to suspend a country, where there has been seizure of power, from these bodies.”

Osinbajo also stressed Nigeria’s call to leaders to always respect the principles of democracy and the constitutions of their respective countries. He was joined by the Minister of State for Foreign Affairs, Ambassador Zubairu Dada, on the one-day trip.