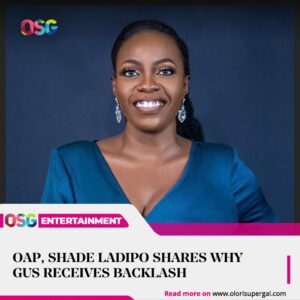 Media Personality, Shade Ladipo has shared her opinion about the twelfth season of Gulder Ultimate Search which has received different shades of feedback.

Taking to her Instagram story, the 38-year-old OAP noted that people are not watching the show because there is no sex, love, and drama.

The Reality TV show themed ‘The Age of Craftsmanship’ premiered on Saturday, 16th October with eighteenth contestants who made it through the regional screening process.

The contestants come from all walks of life from music producers to fitness instructors, cinematographers, and students. They battle for N50 million worth of prizes.

Actor and Gulder Season 7 winner, Kunle Remi is the taskmaster while media personality, Toke Makinwa is the anchor.

However, after a seven years hiatus, the show has sparked positive and negative reactions on social media, ranging from the choice of anchor to comparison of the previous seasons and when it is been aired.

So far six contestants have been evicted 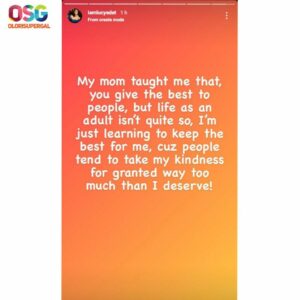