Nigerian table tennis Star, Aruna Quadri, revealed that he would like his children to play table tennis like him, but this depends on their decision. 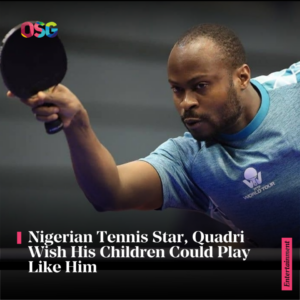 The 32-year-old player, who is regarded as the greatest African table tennis player due to his record-breaking feat in the Ping-Pong sport said he is putting his daughter, Mariam, through to work in his footsteps.

Quadri said “I really want them to play table tennis just like me but it will depend on what they really want to do.

“But for now, we are just trying to train them to play table tennis but they might change to what they want”.

Quadri, who won bronze, for Nigeria at the 2014 CommonWealth Games and reached the quarterfinals at the Rio 2016 Olympic Games, could not replicate the same in Tokyo, as he crashed out of the men’s singles event at the ongoing Olympics in Tokyo. He lost 2-4 in the third round to Brazil’s Gustavo Tsuboi on Tuesday.