Dr. Olugbenga Akingbola is a native of Lagos, Nigeria who has lived in the United States since 1987 when Case Western in Cleveland offered him a residency after he completed medical school in his native country. He then further pursued his studies, finishing a fellowship in Ann Arbor, Michigan, before settling in New Orleans to work as a pediatric clinical care specialist at Tulane Medical Center and raise his family. 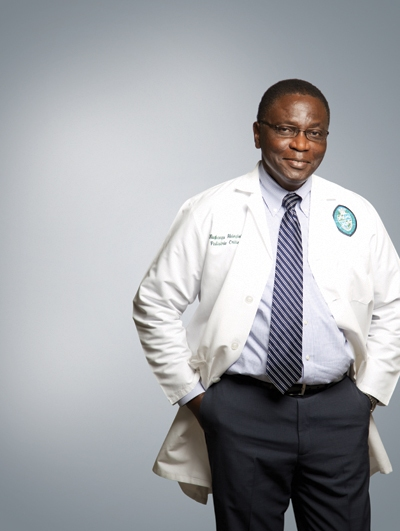 As a devout Christian who also plays tenor saxophone in a gospel group, Akingbola — who is currently the director of Pediatric Intensive Care Unit — says that both his faith and his background in science are driving forces in his work as a successful physician and clinical professor at Tulane.

Dealing with sick children requires extra sensitivity, and Akingbola says that even during his own youth, his father encouraged him to go into a healing profession because of his kindly demeanor.

“I would describe myself as patient,” he says. “I have three boys of my own, and I grew up in a large family so I am comfortable with children and I relate to them,” he says.

One of his toughest cases involved a 10-year-old boy — an only child — with sickle cell anemia who experienced sudden respiratory failure. “We were faced with a very tough decision,” he says regarding treatment. “We had to put him on the ECMO (extracorporeal membrane oxygenation) which uses a modified cardiopulmonary bypass circuit for temporary life support].” It’s a life-saving machine, but it can cause complications. Fortunately, after two weeks, the child’s condition improved. He has now reached adulthood and still receives treatment at the Tulane University Sickle Cell Center. Akingbola has maintained a relationship with the patient and his family.

Proud yet humbled by his work, Akingbola hopes to continue his work and eventually return to Nigeria to help share the profound knowledge he has gained along the course of his career.

Femi Adebayo dissociates self from any Reality ...