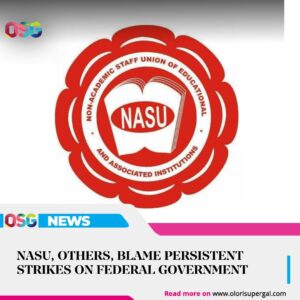 The General Secretary of NASU, Peters Adeyemi, stated this in Abuja on Sunday, 26th September. He also lamented the non-implementation of agreements reached with unions in research institutions 10 years ago.

He said, “We have had to contend with the problem of government and employers of labour in our country abdicating their responsibility and refusing to honour signed agreements.”

Adeyemi said the volume of industrial crises in Nigeria was as a result of the refusal of the Federal Government to implement agreements with the unions.

He said it was becoming problematic because the government was still signing Memorandum of Understanding and Memorandum of Agreement without implementing them.

“It seems, to a large extent, that such actions are nothing, but a fire brigade approach on the part of the Federal Government to get striking workers back to work.

“They sign these MoUs and MoAs when they know they are not going to do anything to address the grievances of the unions. I am not sure the Federal Government even knows the number of MoUs and MoAs they have signed in recent times.”

Adeyemi insisted that the government approach would only precipitate more industrial actions “as the unions will be legitimately right for prosecuting the strike”.

According to him, the issues in contention included the withdrawal of circular on non-skipping of Salary Grade Level 10.