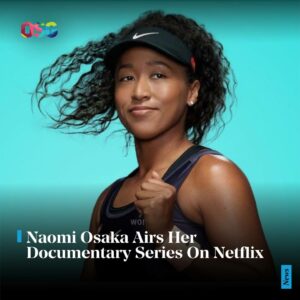 The series titled “Naomi Osaka” with the tagline, “Playing by her own rules”, is directed by Academy Award nominated Garrett Bradley.

Announcing the release on her Twitter page, the Japanese player wrote, “So this had been in the process for the past two and a half years. In light of everything that happened recently, I was terrified of this being released.

“This isn’t like a tennis match where I win or lose and from there people can say whether I did well or not. This is a look into my life from certain time periods and I can’t fight the feeling of wondering how it will be received.

“This is in some ways my soul and a reflection of who I am. I hope there are pieces that people can relate to and maybe other pieces that would help people understand why I make the choices I make.

“If it doesn’t, that’s cool too. It took me a while but I realise that I can’t please everyone and I’m really not trying to.

“When I go to sleep at night I can only hope I am at peace with myself and I hope the same thing rings true for anyone reading this. I’m excited/nervous for you guys to see it and I hope you enjoy it lol. Love you all and stay safe” (sic)

Recall that Osaka, had set off a debate about mental health in June after abandoning her French Open campaign just one match in over a dispute on media duties.

The Japanese player had said post-match news conferences were detrimental to her mental health and likened them to “kicking people when they’re down”.

She later revealed her battle with depression and anxiety in a post on social media, saying she wanted to take time away from the game to get better.