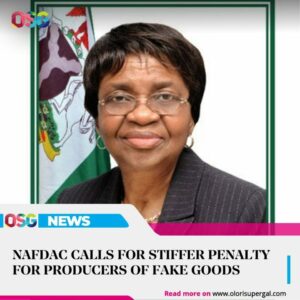 The National Agency for Food and Drug Administration and Control (NAFDAC), has called for a stiffer penalty for producers of fake goods.

The agency also disclosed that it destroyed N5bn worth of unwholesome goods in five months.

These were disclosed in a statement by the agency’s Media Consultant, Sayo Akintola, which was made available to journalists on Sunday, 29th August 2021.

According to the statement, the NAFDAC boss, Mojisola Adeyeye, also proposed stiffer penalties against drug counterfeiters.

The statement read in parts, “In its renewed efforts to safeguard the health of Nigerians, the agency has resolved to go after those who engage in the circulation of counterfeited and expired medicines, cosmetics, and spurious food products in the country until they are apprehended and made to face the wrath of the law.

“The agency would not rest on its oars until merchants of death desist from the nefarious activities, following the destruction of seized unwholesome products worth over N5bn in five months.

“The agency destroyed unwholesome medicines, expired processed food items and cosmetics worth N1,429,580,683.00 in Awka, the capital city of Anambra State, in March for South-South and South East operations.

“Fake and expired medicines and food products worth N2,482,600,290 seized in the South-West were destroyed in Sagamu, Ogun State last week.”