The United Nations has appointed Nigeria’s Minister of Finance, Kemi Adeosun, into the Investments Committee of the United Nations Joint Staff Pension Fund (UNJSPF).
The Under-Secretary-General of United Nations, Jan Beagle, who confirmed Mrs. Adeosun’s appointment, disclosed that the minister would serve a one-year term of office effective from January 1, 2018.
The Representative of the UN Secretary-General on the Investments Committee of the UNJSPF, Carolyn Boykin, congratulated the minister on her appointment and welcomed her to the committee.
Ms. Boykin explained that the purpose of the investments of the UNJSPF was to secure the pension entitlements of the international civil servants who participate in the Fund.

The UNJSPF is a Fund that provides UN pension, death, disability and the other related benefits for staff of the United Nations and the other organisations admitted to membership in the Fund.
The UNJSPF is a multiple employer defined benefit plan and governed by the United Nations Joint Staff Pension Board (UNJSPB), the Staff Pension Committee for each member organisation, and a secretariat to the UNJSPB and to each such committee.
congratulations to finance minister,Kemi Adeosun. 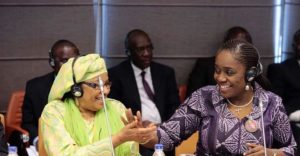