Popular actress, Mercy Johnson Okojie has just been appointed Virony Nigeria limited ambassador. This is coming few months after she became Mr Chef ambassador, this is definitely a good season for the award winning actress.
According to a statement, Virony, the manufacturer of building materials, sanitary wares, daily necessities and household supplies noted that using the Nollywood actress as the face of its products was based on her personality, values and influence among young mothers. 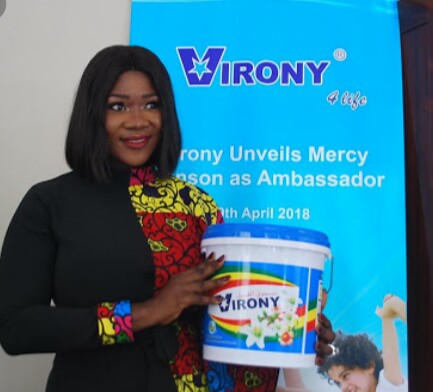 President, Virony Nigeria Limited, Vicky Cao, while presenting Johnson-Okorie to the media, in Lagos on Thursday, said “it is also a testimony to the fact that Mercy Johnson-Okojie is an exciting personality who embodies the strength of the African Woman. Mercy Johnson-Okorie is a home-maker who recognises the importance of the well-being of the family. Her ambassadorial role will see her become the face of Virony Diapers and Detergent for the next two years.”

Describing the union as a great match between Virony and Mercy Johnson-Okorie, she said they had lots of good things in common, such as good reputation and care for society. According to her, Virony has become the symbol of high quality products in Nigeria with majority market share.

“Following up the national strategy “One belt, One road”, on 5th July, 2015, the first environmental friendly overseas manufacturing base of detergent was operated successfully in Lagos. Later on, the manufacturing base for baby diapers was set up in Nigeria as well”, she said.

She also hinted that a 205 acre industrial park was expected to be erected soon in Sagamu, Ogun State in which, more in which more than five factories will be built soon, including sanitary wares, pipelines, hardware, doors and ceramics.