A massive protest was held in the UK recently. Angry Nigerians stormed Abuja House, the residence where President Muhammadu Buhari who is currently in the UK is residing on Tuesday to vent their anger over what they described as the failings of the Nigerian leader back home. 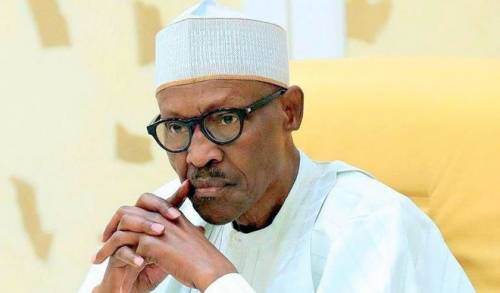 The protesters were armed with different placards to indicate their grievances against the Buhari administration. As reflected in some of the placards, the protesters condemned failure of the Nigerian government to stop killings of citizens by alleged Fulani bandits in Benue and other parts of Nigeria.
Some of the protesters were against the bid by the President to seek re-election among other complaints of inaction of the Buhari administration.

The protest was peaceful as police officers were on ground to maintain law and order.

However, the presidency said the protest was the handiwork of corrupt group of people who are scared of Buhari second term bid.

On Monday, during the National Executive council meeting of APC, President Buhari had made his intention to seek re-election known to the executives.

A source that spoke in Aso Villa also gave his response on the protest said, “Esteemed Nigerians home and abroad, friends and business investors in Nigeria, should please see through the veil of the motive behind the Abuja House, Kensington London demonstration,”

“It was an orchestrated act of desperation and a ploy to blackmail and hoodwink the President from concentrating on his anti corruption campaign, which is fast gaining grounds locally and internationally.

“This unpatriotic act is not unconnected to the Federal government policies to name and shame corrupt citizens and looters; to collate database of Nigerians with homes in UK who are not paying the right taxes, and the hot drive to prosecute all financial defaulters through bilateral and multilateral means.”

Speaking further, the source added that the protesters are not citizens of Nigeria.

“Some of the protesters are not even Nigerians but hired hatchet men paid to do the dirty job. According to security sources, the protesters are said to be bent on embarrassing and humiliating the President throughout his stay in the UK,” the source added.