A man known as Olaoluwa but identified as @itz_laolao on Twitter has revealed himself as the person who shared the viral sex tape of unnamed Babcock students.

A few days ago, a sex video of two Babcock students became the subject of discussion on the internet as many rebuked whoever posted it.

The video caused an outrage, especially after Babcock University published a statement about it, noting that the female student involved has been expelled.

Laolu has now tendered an apology online, stating his regrets in the whole matter but Nigerians are having none of that.

Below is his apology: 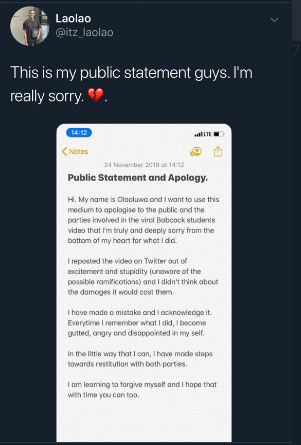 Here are reactions to it:

You reposted a sex tape and you are apologizing after days of tweeting it. I heard people sent you multiple DMs to delete it but you chose to enjoy the sound of notifications entering your phone. Clout is a disease!

Then someone would ask why it took Busola 20years to speak up. The next time you ask someone why they didn’t speak up since, this is why!

You collected your retweets but ruined someone’s reputation and put their life and family in great mess.

Everyone will get what’s coming for them?

Now we know the origin of that video, can someone related to the victims find this idiot and make an example out of him?
You should be writing this dumb statement in jail.

To put his ass behind the bars and make sure the doesn't do this to any other gal ??? the situation isn't funny buh we should also learn to use the phones we have aside for chat and call.. Please dear dnt take ur live better days are ahead and he would suffer it