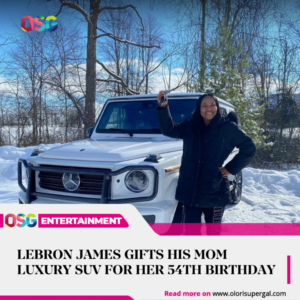 American professional basketball player, LeBron Raymone James Sr. Surprised his mother on her 54th birthday, after he gifted her a car.

The father of three who is referred to as King James bought his mother a Luxury SUV to celebrate her special day.

His mother, Gloria James, took to her Instagram page to show off her gifts as she thanked her son for always caring for her..

“Thank you my caring and giving son, King James, for my early surprise birthday gift!

“You’re always thinking of and doing things to help make my life easier and make me happy.

LeBron and his mother share a special kind of mother-son bond. In 2014, King James penned a heartfelt letter of appreciation to single moms.

He’s always been appreciative of the sacrifices and love his mother has given him.

“She decided that while she was figuring out how to get on her feet, I needed some stability in my life,” James said. “I needed to stay in one place and experience the support and security that she had felt growing up in a big family. So she sent me to live with my pee-wee football team coach, ‘Big Frankie’ Walker, and his family. She later said to me, ‘It was hard, but I knew it was not about me. It was about you. I had to put you first.”

LeBron credits his mother for being a prime example of how to parent his children (Bronny, 17, Bryce, 14, Zhuri, 7).