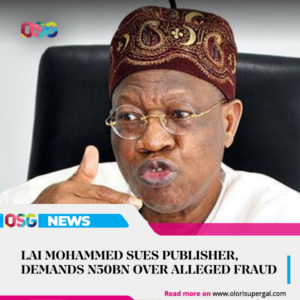 The Minister of Information and Culture, Alhaji Lai Mohammed, has dragged an online publisher before a High Court of the Federal Capital Territory in Abuja over alleged libellous publication.

The minister, in the suit filed by his lawyer, Taofeek Yahaya, against the online publisher, Jackson Ude, joined the editor of the publication, Uduma Mba, as the second defendant in the matter.

In the writ of summons dated 21st January 2022 and signed by his counsel, the plaintiff is seeking N50bn damages.

According to the court process document, the defendants in the publication, Pointblanknews, alleged that the minister was involved in a N10bn fraud, adding that the Independent Corrupt Practices and Other Related Offences Commission has commenced investigating the matter.

Mohammed said the report published on 3rd August 2022 in Pointbalnknews.com was circulated worldwide and has caused damage to his reputation.

He prayed the court to restrain the defendants from further publishing defamatory reports against him.

According to the writ of summons, one of the witnesses listed to give evidence in the matter is the minister, who is expected to lead evidence.

The case is yet to be assigned to a judge.