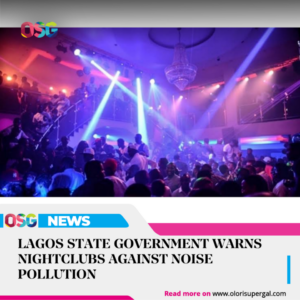 The Lagos State Government has issued a strict warning to nightclubs, bars, and lounges over noise pollution in the state.

A statement signed by the Commissioner for the Environment and Water Resources, Tunji Bello said raids were carried out in some nightclubs in Lekki following repeated complaints by residents in the area and different parts of the state.

the Commissioner said he had directed enforcement officers of the Lagos State Environmental Protection Agency LASEPA to raid a club on Admiralty Way, Lekki following complaints of flagrant noise pollution.

He stressed that when the enforcement officers got to the clubs, different giant speakers and musical instruments were seen assembled for stage plays, and shows, blaring music, prompting its closure.

The commissioner averred that many residents of highbrow Lekki, especially elderly citizens have inundated his office with petitions and complaints about the adverse effect of the noise pollution on their health every night till the early hours of the day.

While giving a commitment that the exercise would be a continuous one, he advised all clubs who engage in noise pollution to retrace their steps before it is too late.

He maintained that apart from putting such clubs or bars under lock and key, the owners of such relaxation points would also be prosecuted according to the dictates of the law.

He reiterated that no one or organisation would be treated as a sacred cow in the latest campaign and that research has also shown that noise pollution is one of the causative factors for reduced lifespan.

Bello added that the second pillar of the 6 points Development Agenda of the present administration is Health and Environment with combating of noise pollution being an integral feature.