Production in an asphalt plant in Ijora has been put on hold .

The Lagos State government on Tuesday ordered a construction firm, Righteous Construction Company, to stop production of asphalt at its plant located in Ijora area of the state over pollution. 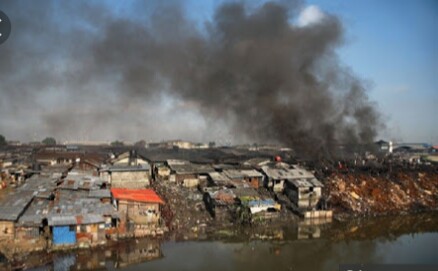 Mr. Babatunde Durosinmi-Eti, Lagos commissioner for environment, served an abatement notice, ordering the firm to stop production following complaints by residents of the area over negative impacts of the emissions released from the asphalt plants into the community.

Reports indicated that emissions released into the atmosphere by the firm’s plants have resulted in series of health problems to residents of Jericho police barracks and Oto community in area the company is located.

Residents of the area, especially children, suffer health challenges ranging from breathing difficulty, chest pain to cough and eye problems as result of the emissions.

Members of the community also lamented the contamination of their water, clothes and food by the emissions from the plant.

Lagos ministry of health on Monday also sent its officials on a fact-finding mission to the community.

It was gathered that the health officials met with residents of the community.

Confirming the visit of the ministry of health, a resident named Inspector Bako Hussain, said that the government had promised to shut down the firm on Wednesday.

He said, “The team from Ministry of the Environment said they had got a seal order and that they would come on Wednesday. Since the report was published, the company has stopped production.”

JAY Z REVEALS HIS REACTION WHEN HE ...