LADY REVEALS SHE HAD SEX WITH TUFACE IDIBIA ON INSTAGRAM

This happened on Instagram after Annie replied a fan who accused her husband of cheating.

The lady simply identified as Akume asked Annie to stop defending her husband as she has also had sex with him.

In the process of exchanging comments, she revealed that she had sex with Tuface in 2014 while in Detroit. 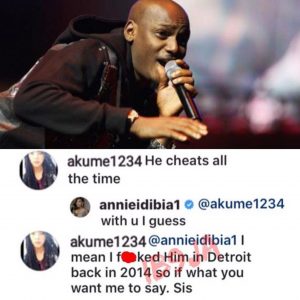