Popular American reality T.V star , Kylie Jenner took to Instagram on Sunday to confirm her pregnancy and announce that she and boyfriend Travis Scott welcomed their new bundle of joy after months of speculation. No name has been revealed yet. 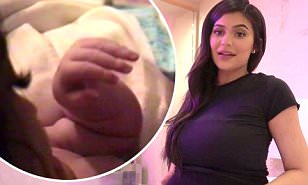 In her social media statement, the make-up mogul wrote: ‘My beautiful and healthy baby girl arrived February 1st and I just couldn’t wait to share this blessing.’
She added that pregnancy has been life changing for her and she revealed that it was her choice to keep the entire process a secret . She thanked her friends and family for keeping quiet about it too.

Kylie also reflected on her experience carrying the child she wrote: ‘Pregnancy has been the most beautiful, empowering, and life changing experience I’ve had in my entire life and I’m actually going to miss it.’

Along with the post she also took to YouTube to share an 11-and-a-half minute video titled ‘to our daughter’ of her journey which was edited by Tyler Ross with music by Jacob Wilkinson-Smith.

At the very end of the clip Kylie gives the very first glimpse of the child as it shows an arm and a leg while the reality star cradles the bundle of joy.