Liverpool Manager has admitted that Allison making a mistake was inevitable and was bound to happen sooner or later, after the Brazilian gifted Leicester City a cheap goal in Liverpool’s 2-1 win over Leicester City.

Speaking after the game the Klopp said:

“It was clear last week it will happen one day. I didn’t think it would immediately happen the next week. 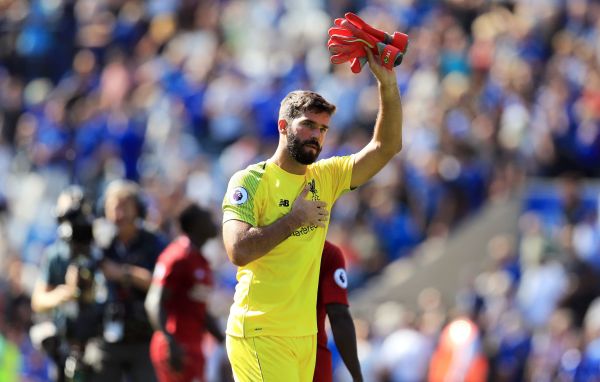 “I told him the best game to do it was this one because we won it. It’s all fine. Now we have ticked that box as well – don’t play all the balls to Alisson.

“He was cool after it when the crowd tried to make him a bit nervous, which is of course normal. That’s how it is. No problem with that.”

Allison had a chance to clear the ball, but dallied on the ball and allowed Iheanacho to dispossess him and clear for Rachid Ghezzai to score and reduce the deficit.

Allison’s error failed to dim Klopp’s spirit though. The former Dortmund manager admitted he would have taken the 12 points if it was offered him at the start of the season.

“If somebody would have told me four weeks ago you have 12 points from four games I would buy it, whatever goal difference you want,” Klopp said.

“Having 12 points and knowing you can improve is good.”

Liverpool join Chelsea at the top of the Premier League standing after four wins in four.