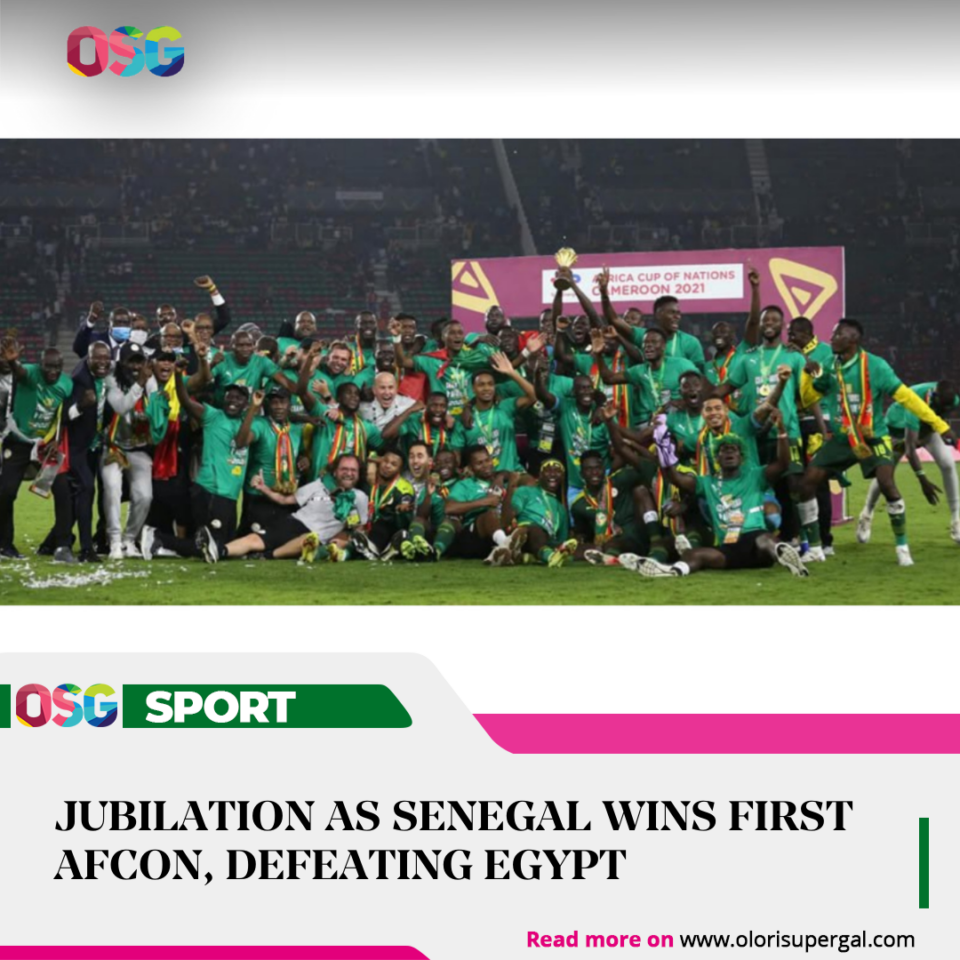 Sadio Mane made up for missing from the spot in normal time to score the decisive penalty as Senegal overcame Mohamed Salah’s Egypt 4-2 in a shoot-out to win their first Africa Cup of Nations title after Sunday’s final finished goalless at the end of extra time.

Mane had seen Mohamed Abou Gabal save his seventh-minute penalty at the Olembe Stadium in Yaounde but Egypt could not capitalise as they went all the way to extra time for the fourth consecutive game at this Cup of Nations.

Salah was due to step up to take Egypt’s fifth penalty but with Mohamed Abdelmonem hitting the post and Mohanad Lasheen having his kick saved by Edouard Mendy, the Liverpool star did not get his chance and was already on the verge of tears as his club team-mate Mane prepared to strike the decisive blow.

After two previous final defeats, Senegal are Cup of Nations winners at last, while Egypt missed out on a record-extending eighth continental crown that would also have been a first for Salah.

Senegal’s celebrations followed a disappointing final, the fifth in the last 11 editions of the tournament to be decided in a shoot-out after a goalless draw.

Indeed Egypt had already twice won finals that had been settled on penalties after finishing 0-0, and they had already won in the same manner twice in the last fortnight, against the Ivory Coast in the last 16 and the hosts in the semi-finals.

Salah, heartbroken had begun to tear up when Liverpool teammate and Senegal player, Mane stepped up to console him.

Senegal’s national team, the Teranga Lions were not the only winners, there were others who bagged individual honours.

With eight goals scored in the tournament, bronze winner and Cameroonian striker Vincent Aboubakar was the top scorer and the winner of the Golden boot.

The Senegalese Magician, Sadio Mané is crowned Man of the Competition after his over-the-top performance with the Lions of Teranga.

Egyptian Pharaohs did not go home with just the silver medal. Their keeper Mohamed Abou Gabal ‘Gabaski’ was crowned AFCON Final Man of The Match.

Desperate to make up for losing the 2019 final to Algeria, Senegal had a golden early chance to take the lead which they did.

Sall, who had been due to visit Comoros at the end of a trip that took in Egypt and Ethiopia, cancelled the last leg in order to welcome the triumphant Lions on their return to Dakar at 1300 GMT Monday, RTS said.

After two previous final defeats in 2002 and 2019, Senegal finally claimed their first Cup of Nations title.

The Lions will be decorated by Sall on Tuesday at the presidential palace in Dakar, RTS television said.

“The president of the republic declared Monday a public holiday, a paid day off, following the brilliant victory of the Lions,” RTS said, citing a presidential decree.