“I Have Never Done My A**” – Celebrity Stylist, Toyin Lawani Reveals

“I have Never Done My A**” – Celebrity Stylist, Toyin Lawani Reveals 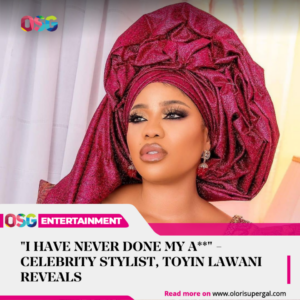 This comes following speculations on social media that she had butt surgery after a video of the shape of her buttocks surface online.

The mother of three while reacting to the speculations, shared a video of her husband tapping her buttocks with his feet and went on to say she has always been open to informing people about her numerous surgeries but has feared touching her buttocks due to relating complications and continuous surgery for any abnormality.

She also noted that she had liposuction on the stomach years ago to get rid of fat and also breast implants due to lumps elimination.

“My Dm is crawling mad with funny Question. oh lord, there are so many people out there who still believe anything they read on social media, see I don’t have any surgeon to send you to for your Ass, cause the honest truth is this, and I say it all the time as I’m very open to surgeries I have had, so I talk about them.

“I have never done my ass and will never do my ass as I’m worried about the complications and the fact that you will have to continuously redo it if anything goes wrong, or before left yansh go and be bigger than Right yansh.

“yes I have had Lipo on the stomach years ago and breast implants due to the Lumps removal from my breast which disfigured it and it was reconstructed.

“I have had for 15years and for safety I have renewed once after 10years from another surgeon Dr. ASLAN , if you can’t maintain it don’t go into it, Be safe and get enlightened don’t go and fall inside gutter because someone Mis informed you.

“And to everyone asking if you can breastfeed with implants, yea you can, I breastfed my son after my implants and I’m still breastfeeding my Daughter too, for the safest implants try cohesive gel, they are like gummy bears, won’t leak easily and they are safer.

“It’s children of nowadays that are freaked out about surgeries, see he don tey, na we open their eyes.